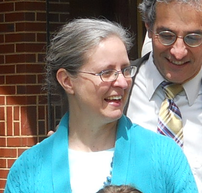 "Let's get this submarine in the water!" Mrs. Carts says. She's having fun using her engineering skills to help the KIDS kids make their design concepts a reality.
Chairperson- Paola Addamiano-Carts is a Virginia Tech grad (BSME) who worked in the aerospace industry as a Design Engineer for Pratt & Whitney and Engineering Manager for EG&G Pressure Science (now part of Eaton).  In 2014, she and her son attended a SNAME student conference where they learned about the International Submarine Races.  After thoughtful investigation, they decided to enter the race as part of their home school curriculum. That first entry, Il Calamaro, was such a wonderful learning experience that they sought to share it and similar hands-on learning opportunities with more people.  Hence, Kids Into Discovering Science was born.

Secretary- John Hayes attended Capitol College (now known as Capitol Technology University) and received a Bachelor of Science degree in Electronics Engineering Technology in 1989.  He joined the US Naval Reserves in 1985 while in college and served 10 years as an Electronics Technician in avionics, mostly at Andrews Air Force Base and Keflavik, Iceland.  Upon graduation from college, John worked for 10 years for various defense contractors, mostly focusing on advanced combat system integration on aircraft carriers, LHD Class (Amphibious Assault) and LPD-17 Class (Amphibious Transport Ship) Navy warships.  For the past 16 years, he has worked as a Supervisory Patent Examiner for the US Patent & Trademark Office, and supervises 12 patent examiners in the specialized data processing art.  In his years volunteering with KIDS, John has served as submarine steering system mentor, drive train mentor, assisted with propulsion and was the adult lead for the Team America Rocketry Challenge team.  John is scuba open water certified and was a pilot for KIDS's 2015 submarine, Nautilus.

Treasurer- Kiran “Ron” Sitoula is Vice-Mayor for the Town of Indian Head, Maryland. He is also a board member for Charles County Public Library. He has over 20 years of experience working with various not-for-profit organizations and is involved with various alumni organization. He is passionate about science and technology. An alum of Budhanilkantha High School in Nepal, he completed his undergraduate from Ohio Wesleyan University with a degree in accounting and completed his masters in database technology from UMUC. He currently works as an IT Specialist for the US Department of Treasury.